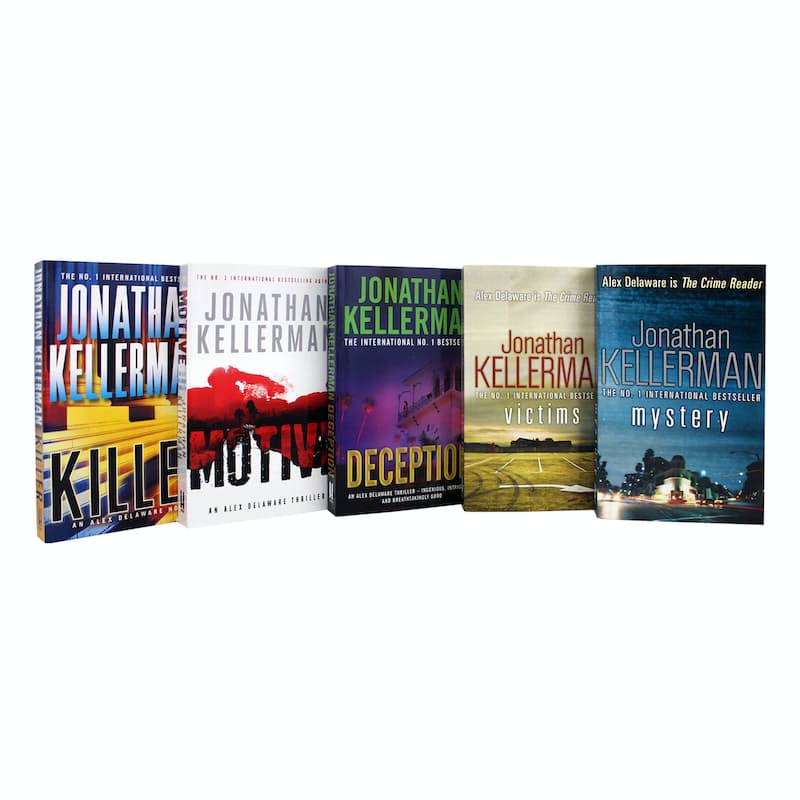 Jonathan Kellerman is the #1 New York Times bestselling author of more than forty crime novels, including the Alex Delaware series, The Butcher’s Theater, Billy Straight, The Conspiracy Club, Twisted, True Detectives, and The Murderer’s Daughter. With his wife, bestselling novelist Faye Kellerman, he co-authored Double Homicide and Capital Crimes. With his son, bestselling novelist Jesse Kellerman, he co-authored Crime Scene, A Measure of Darkness, The Golem of Hollywood, and The Golem of Paris. He is also the author of two children’s books and numerous nonfiction works, including Savage Spawn: Reflections on Violent Children and With Strings Attached: The Art and Beauty of Vintage Guitars. He has won the Goldwyn, Edgar, and Anthony awards and the Lifetime Achievement Award from the American Psychological Association and has been nominated for a Shamus Award. Jonathan and Faye Kellerman live in California and New Mexico.

Like his fictional protagonist, Alex Delaware, Jonathan received a Ph.D. in psychology at the age of 24, with a specialty in the treatment of children. He served internships in clinical psychology and pediatric psychology at Children’s Hospital of Los Angeles and was a post-doctoral HEW Fellow in Psychology and Human Development at CHLA.

IN 1975, Jonathan was asked by the hospital to conduct research into the psychological effects of extreme isolation (plastic bubble units) on children with cancer, and to coordinate care for these kids and their families. The success of that venture led to the establishment, in 1977 of the Psychosocial Program, Division of Oncology, the first comprehensive approach to the emotional aspects of pediatric cancer anywhere in the world. Jonathan was asked to be the founding director and, along with his team, published extensively in the area of behavioral medicine. Decades later, the program, under the tutelage of one of Jonathan’s former students, continues to break ground.

In 1985, Jonathan’s first novel, WHEN THE BOUGH BREAKS, was published to enormous critical and commercial success and became a New York Times bestseller. BOUGH was also produced as a TV movie and won the Edgar Allan Poe and Anthony Boucher Awards for Best First Novel. Though no longer active as a psychotherapist, he is a Clinical Professor of Paediatrics and Psychology at the University of Southern California Keck School of Medicine.

Even hundreds of closed cases to his credit can't keep LAPD police lieutenant Milo Sturgis from agonizing over the crimes that don't get solved - and the victims who go without justice. Victims like Katherine Hennepin, a young woman strangled and stabbed in her home. A single suspect with a solid alibi leads to a dead-end - one even psychologist Alex Delaware's expert insight can't explain.

The only thing to do is move on to the next murder case - because there is always a next one. This time the victim is Ursula Corey, a successful, attractive divorcee who's been gunned down - not a robbery but an execution, a crime that smacks of simple, savage revenge. And along with that theoretical motive come two strong contenders for the role of the suspect: the dead woman's business partner/ex-husband and her divorce lawyer/secret lover. But just as Alex and Milo think they're zeroing in on the killer, a bizarre new clue stirs up echoes of the unsolved Hennepin murder. And the discovery of yet another crime scene bearing the same taunting signature raises the specter of a serial killer on a mission, whose twisted method is exceeded only by his manipulative and cunning madness.

Her name is Elise Freeman, and her chilling cry for help - to whoever may be listening - comes too late to save her. On a DVD found near her lifeless body, the emotionally and physically battered woman chronicles a year-and-a-half-long ordeal of monstrous abuse at the hands of three sadistic tormentors. But even more shocking than the lurid details is the revelation that the offenders, like their victim, are teachers at one of LA's most prestigious prep schools.

With Elise dead, homicide detective Milo Sturgis is assigned to probe the hallowed halls of Windsor Prep Academy. And if ever he could use Dr Alex Delaware's psychological prowess, it's now. From the start, this case promises to be an uphill climb for truth and a down-and-dirty fight for justice. Searching for predators among the privileged, Alex and Milo may well be walking into a highly polished death trap.

Well used to elevated emotions, psychologist Alex Delaware shrugs off a joking death threat from beautiful Beverly Hills physician Constance Sykes, whose attempt to secure legal custody of her baby niece is thwarted by Alex's forthright report to the court. Alex plays down the threat until LAPD's Milo Sturgis rushes to his side with the shocking word on the street that a hit's been taken out on him. But while Alex may be in grave danger, it won't be from the Beverley Hills doctor, for Connie is soon discovered brutally slain. When her sister Cherie and the baby disappear, apparently on the run, Alex's search for answers leads him to aged rockers, charming homeboys and even Machiavellian judges. As the darkest of secrets are peel away, and a cruel system churns through family lives, Alex seeks to stop a vicious killer and save a child from a life of nightmares . . . or worse.

Not since Jack the Ripper has there been such a gruesome crime scene. One look at the victim's apartment turned charnel house is enough for Milo Sturgis to summon The Crime Reader. But even Alex Delaware's skills may be stymied when more slayings occur in the same ghastly fashion . . . with no apparent connection between them.The only clue left behind - a blank page bearing a question mark - seems to be both a menacing taunt and a cry for help from a killer baffled by his own lethal urges. This one will haunt The Crime Reader's waking life, and his darkest dreams, long after its end.

In a glamorous area of Los Angeles, the Beverley Fauborg hotel is about to close for good. Psychologist Alex Delaware and his girlfriend Robin are making a farewell visit to the hotel bar when one patron in particular grabs their attention - a beautiful but aloof young woman dressed all in white. Two days later, Alex is called in on a murder case and is shocked when he recognizes the victim as the woman in white. Discovering her true identity is not going to be easy though, and Milo's investigation into the girl nicknamed 'Mystery' leads him to the darkest of secrets in the highest of places.

Yep, you read that right. And to give you a visual idea of just how much that actually is, picture a fresh-outta-the-oven pizza in your mind. Let's make it Hawaiian.

Those 8 delicious pizza slices represent the product you want.

But you only have to pay for 2.

How great is that?